Skip to content
Cynthia HaileyMay 26, 2020SportsLeave a Comment on From how many meters is it actually altitude training?

How does altitude training work?

“From an altitude of around 2000 to 2500 meters, the air pressure is lower. As a result, the partial pressure of oxygen in the body decreases and the concentration of oxygen in the blood is reduced, ”the sports doctor explains to FITBOOK. The body tries to counteract these – actually negative – framework conditions with several adaptation mechanisms.

If there is a lack of oxygen in the blood, the kidneys produce more erythropoietin (better known as EPO) and, as a result, more hemoglobin and red blood cells (erythrocytes). Together with better blood flow to the muscles, these mechanisms ensure that the oxygen transport in the blood improves.

When does the effect start and how long does it last?

The difference to prohibited doping (taking EPO tablets, autologous blood doping) with regard to competitions: In the mountains, the effect of natural adaptation to oxygen shortages lasts for a comparatively short time. The altitude training expert puts it at several weeks.

According to Stephan Pramsohler, quite a lot of training is necessary for the effect of the improved oxygen transport to occur at all. At least 15 hours of training over a period of three weeks are considered a minimum so that the body produces enough red blood cells to noticeably improve endurance performance, according to the expert.

Does every athlete benefit from altitude training?

Another issue is adjustment difficulties in altitude training: In high mountains, the body has to work much harder in order to be able to achieve the same performance as in lowlands (hence the faster breathing and the increased pulse). Many athletes would therefore report that they feel weak and inefficient.

An evaluation of several studies has shown that there is something to this feeling  . The researchers’ conclusion: Yes, the performance during endurance training in the mountains decreases – and even minimally from an altitude of 600 to 800 meters! From 1000 meters, losses of two to four percent are to be expected, and from 2000 meters of at least four percent. But how does this negative impact fit together with the hoped-for increase in performance? 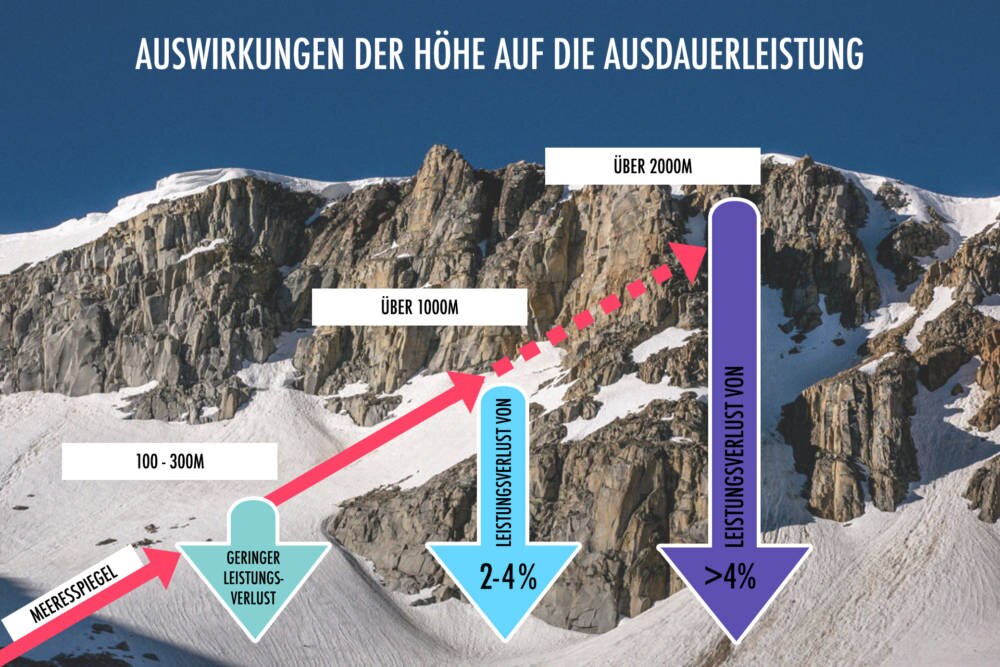 Sports scientist Stephan Pramsohler does not see the current study situation on altitude training as particularly convincing – at least when it comes to increasing performance for athletes: “Physiologically advantageous adjustments to oxygen transport take place, but at the same time the athletes are not able to achieve the maximum intensity retrieve during training. These two effects seem to neutralize each other, which is why the bottom line is that the method is less effective than assumed a few years ago. ”

Hypoxia training in the gym

In order to benefit from the positive effects of high-altitude training, you no longer have to set off for the high mountains. In the meantime, training is offered in most large cities when there is insufficient oxygen (technical term: hypoxia training). In this case, nitrogen is supplied in a targeted manner in sealed rooms, which reduces the percentage of oxygen and the adjustments described above take place in the oxygen transport. Certain hypoxia masks also operate according to the same principle. By the way, if you mainly do strength training, you shouldn’t wear it .

Hobby climbers should of course acclimate themselves

Such training should prepare the body at home for the increased stress on demanding mountain tours. This not only makes you fitter when hiking, but above all reduces the risk of dangerous altitude sickness. Because: Adequate physical preparation and acclimatization, as is usually done by professional alpinists, is often neglected by hobby mountaineers. This not only affects your fitness, but also increases the risk of the dreaded altitude sickness. And in the worst case it can even be fatal.